From Pathologic Wiki
Jump to: navigation, search
This entry includes information regarding both Pathologic (2005) and Pathologic 2 (2019).

There are several distinct groups and factions in Pathologic. This page will list the most prominent.

The Healers are the three playable characters. They each have their own unique game-play abilities and solutions to the epidemic.

These are NPCs who live in the town, with whom the player character can speak and trade items.

These people are native to the area of the Steppe where the events of the story takes place and upon where the Town has been built.

The Kin in Shekhen in Pathologic 2

The Kin is the name given to the Steppe natives. Their majority of their culture and beliefs are based around a deity known as Bos Turokh. They believe bulls to be sacred. Once, they were a nomadic people that lived on the Steppe, but now most live in the Termitary and work for Big Vlad as part of the Bull Enterprise.

They are the working class of the town, each caste performing their traditionally-given roles. Their labour supports the town economically.

The menkhu—"Those Who Know The Lines"—are a special caste who are allowed to open bodies. While menkhu are notable in-game for their ability to dissect human bodies, their main purpose seems to be the dissection of bulls.

The right to open bodies is passed down through family inheritance. Isidor Burakh is an esteemed menkhu, and he passes this knowledge to his son, Artemy.

Humanoid creatures—"the Worms inside Boddho's body"—who are part of the Kin. They are responsible for many tasks, such as the harvesting of herbs, creating medicines, and trading. Many worms live in yurts near the border of the Steppe.

A worm that has the duty of herding cattle between the Steppe and the Abattoir is known as an odongh, translated in-game as "he who holds Him by the horns". The word odongh does not have a clear real-world origin, but may come from the name of a cryptid called the Mongolian Death Worm: olgoy-korkoy (олгой коркой), or 'intestine worm'.

While implied to be the females of the Worm "species", they nonetheless appear fully human. They commune with the earth and dance to bring herbs to the surface.

Traditionally, herb brides are only allowed to couple with odonghe, and can be bought and traded between them.

Workers of the Abattoir who are tasked with the the slaughter of bulls and the processing of their meat.

While they are traditionally able to dissect bulls, they are still prevented from the dissection of human bodies.

Traditionally, they are also the only ones permitted to dig in the earth (although Grace is allowed within the bounds of her duty as cemetery caretaker).

The world within Pathologic and Pathologic 2 is home to a number of hostile enemies.

These enemies are general Townsfolk. They will cause health damage with their attacks.

These enemies are related to the Sand Plague. They will cause immunity/infection damage with their attacks.

There are several notable gangs in the Town. The adults of the Town fall into the Gang of Bad Grief, head of criminal activities in the town. They are responsible for trading of contraband items.

Children belong to either the Dogheads or the Soul-and-a-Halves. 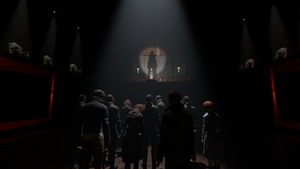 The Inquisition in Pathologic 2

Inquisitors are people of a restricted group of specialists for whom The Powers That Be would assign tasks of extraordinary nature. The Inquisition arrives in The Town after it becomes clear that the Healers cannot solve the epidemic on their own. The Inquisitor that heads the operation is Aglaya Lilich.