Pathologic 2 (Russian: Мор) is a re-imagining of the Russian survival/roleplaying game Pathologic, created by Ice-Pick Lodge. Made with Unity,[1] the game was released for PC on May 23, 2019, after a initial predicted release of 2018.[2] It saw release for Xbox One on December 13, 2019[3] and for Playstation 4 on March 6, 2020.[4]. Linux and Mac ports have yet to be released, though have been stated to be a promised goal of Ice-Pick Lodge.[5]

Pathologic: The Marble Nest, a standalone short story set in the Pathologic universe, was released on 1 December 2016, and later included as full DLC for the main game on October 28, 2019.[6] An unofficial (though supported by Ice-Pick Lodge) patch for Simplified Chinese was created by kevinw and released on March 3. 2020. It can be downloaded and installed on Steam.[7] Brazilian Portuguese support was added on November 21, 2020, which can also be downloaded through Steam[8]. The Brazilian Portuguese patch was created by rato profeta.

All the action takes place in The Town—a steppe settlement in which neither the whereabouts nor the time period in which the events unfold are specified. The town culture represents a mix of Russian culture from shortly before the 1917 Revolution and the ancient traditions of the steppe inhabitants, which include numerous strange customs and superstitions.

The protagonist of the game is a surgeon named Artemy Burakh, also known as the Haruspex. He is the son of the only local physician, Isidor Burakh, and spent the last several years away from his hometown in the capital city, where he received medical training as a surgeon.

One day he receives a letter from his father, who informs him that 'great difficulties' are coming, and requests his son's assistance. Artemy sets off by train, encountering a strange fellow traveller, and experiencing several strange visions during his journey. Upon arriving in the town, he is greeted by three locals who try to kill him. Somehow he manages to deal with the attackers, and shortly after, he encounters a couple of looming figures in skeletal bird masks, resembling the plague doctors of centuries past. The mysterious figures tell him that the locals suspect him of killing an important resident of the town and they ambushed him as an act of revenge.

Artemy must find out what is going on in his native town as well as prove his innocence.

The core gameplay of Pathologic 2 is designed around ruthless endurance, balancing the player character's survival meters (Health, Hunger, Thirst or Stamina, Immunity or Infection, and Reputation) while pursuing the story's goals. Players are encouraged to approach problems from different angles - it is a constant reminder that violence is not always the answer, and there is always an alternative answer. Resources can be obtained through "positive" methods (such as bartering and trade) or "negative" methods (such as violence and theft), which can impact your in-game reputation. A negative method is not necessary the "wrong choice", as detailed by the game's design.

For a detailed explanation of each one of Pathologic 2's mechanics, see Game Mechanics. For information regarding trade and barter, see Trading.

In August 2018, an alpha version of the game was released. On May 23 2019,[10] Pathologic 2 was released on Steam, Humble Bundle and GOG.com including the first route.

Pathologic 2 received "mixed or average reviews" according to review aggregator Metacritic, with a score of 69 based on 27 reviews, but with an average user score of 8.5.[11] Critics praised the game's unique atmosphere, but criticized its unforgiving survival mechanics, clunky combat, and overall difficulty.[12][13] However, it has been considered a tremendous success by independent critics, such as MandaloreGaming, who called it "a tremendous improvement on everything in the original"[14]. It has also been praised by RangarRox[15], Hbomberguy[16], SulMatul[17] and others. It has also received both criticism and praise for its approach to game difficulty, where its "almost unbearable" nature[18][19][20] can be altered by means of difficulty sliders. GameGrin describes it as, "(...) very robust and makes the game much more accessible than it otherwise would have been."[21]

The Xbox One release of Pathologic 2 coincided with the full release of Pathologic: The Marble Nest on October 28, 2019. The release was met with negative criticism regarding performance and system optimization, with critiques of long load times and corrupted save files. Similar critiques were given for the Playstation 4 release on March 3, 2020. Cultured Vultures stated "Pathologic 2 does a fine job of capturing the feelings of a town under distress, though it can feel like a painful chore to play with technical glitches and loading times hindering the experience overall."[22] With the release of the Playstation 5 in September 2020, players reported less stutter, and overall gameplay improvement.[23]

Xbox One and Playstation 4 console releases were done by Pingle Studio.[24]

→ A full list of those mentioned in the credits of Pathologic 2 can be found here.

These badges are only available on Steam, and are unavailable on GOG.com or console releases of the game.

Full images of the Steam profile backgrounds and trading cards available for Pathologic 2. Much like the badges, these are unavailable on GOG.com or console releases of the game.

Achievements are available on Steam, Xbox One, and Playstation 4. To see a list of achievements/trophies and how to earn them, see Achievements and Trophies.

This money was enough to fulfill an expanded Town, an expanded Steppe, as well as expanding upon lucid dreams. Initially, the release of the game was scheduled for autumn of 2016. The developers claim that there were enough changes and innovations in the game to call it a separate game and not a remake.[27]

On December 1, 2016, those who donated a sufficient amount of money to the Kickstarter or the game site were granted a demo version of the game called Pathologic: The Marble Nest, which was treated as a separate game at the time.[28] Later the development was extended until autumn of 2017. On March 14, 2017 "The Marble Nest" became available to everyone.[29] In August 2017, the development was extended until 2018, changing the Russian name from "Mor (Utopia)" to just "Mor", and the English one from "Pathologic" to "Pathologic 2". At the same time, Pathologic 2 also remains a new game, and not a continuation of the original.[30]

The development of Pathologic 2 place emphasis on making the Town feel organic and alive. Improvements on things such as NPC and Plague AI were done to deliver a more realistic interpretation of how living people would react to a catastrophe. There was also dedication made towards new quests, events, and plotlines, to both add to what may have been removed in the reimagining, as well as to develop minor characters.

Gameplay was designed to be far more balanced, where core mechanics from Pathologic (2005) were improved on to feel more "tense and emotional".[31] Survival mechanics were kept as true to the original as possible, while modernizing them to appeal to a larger audience. Localization in English was done internally, with the help of trusted, outsourced native speakers and writers.[32] Translation into English was led by Alexandra "Alphyna" Golubeva.

Information collected from Kickstarter Update 8, as well as the main page:[33]

The remake version will feature new quests and content, improved visuals from the Unity engine, more balanced gameplay, smarter AI for the NPCs, realistic behavior patterns for the Sand Plague disease, and improved English localization. Still, the team had planned a series of stretch goals—new ideas—to have incorporated into the new Pathologic. Additional funding has allowed the team to reach the Town Extended, the Steppe Extended and the Lucid Dreaming stretch goals.[34] Crowd-funding is still open, and it will be used to keep improving the development of the game.

Two tiers of the Kickstarter goals were not reached, yet can be seen below. 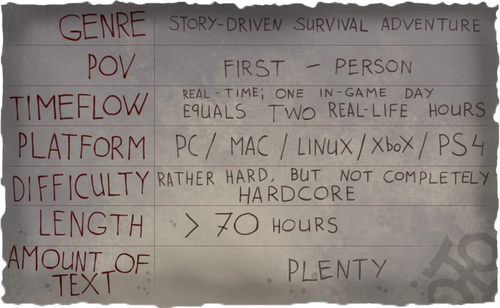 Information regarding the full release of Pathologic 2, as stated in the Kickstarter. [36]

The Ice-Pick Lodge team has insisted on labeling the 2019 remake as a reimagining. They claim "the new Pathologic will be different from the original one," while maintaining the primary structural elements of the original.[37] The story still takes place across twelve days in a remote Steppe town; the same three protagonists will be available, whose stories complement one another; the world is still three-fold, as "Pathologic remains a game about three ideologies and worldviews clashing". At its gameplay core, Pathologic is still a survival game—the state of your character is still represented by a number of bars, requiring the player to do a lot of resource juggling, with their main resource and main opponent is still time itself.

Instead of being a traditional "remake" - with the only change being mechanics, story, or graphics - Pathologic 2 is meant to be viewed as how a sequel might be, with references to past events and establishing a suggestion of the passage of time.

On November 29, 2018, Nikolay Dybowski announced the decision to release Pathologic 2’s scenarios separately, with the Haruspex’s route as the first complete route. Future routes would feature the Bachelor and the Changeling’s stories.[38][39]

Limited details have since been released regarding the Bachelor’s Route. EDGE Magazine published an interview with Nikolay Dybowski in their January 2020 issue which mentioned that both the Bachelor and Changeling routes would be different genres, including experiences that would likely "take less time than the Haruspex route", yet that Ice-Pick Lodge would ensure not to risk sacrificing player enjoyment for shorter game time.[40] On July 6, 2020, Ice-Pick Lodge announced that they were working on the second of three promised scenarios, "The Bachelor Route", stating it is to be released "in the foreseeable future."[41]

On February 28, 2021, Ice-Pick Lodge released a statement on their podcast detailing information about Know By Heart and Pathologic 2 where it was confirmed there would be no 2021 release for the Bachelor Route.[42] Further details provided mentioned that both "the Haruspex and the Bachelor view the Town very differently, [and] their views must be represented properly." Hints were provided about a different mind map and unique time based mechanics, noting "standing still will be scary for a whole different reason".[43]

Very limited information has been provided about Changeling’s Route. Information has mostly been delivered in statements regarding the development of the Bachelor Route, which is taking priority over the Changeling Route.

Concept art for specific characters can be found on their pages.